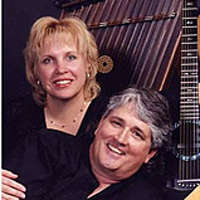 By Montana House on August 18, 2015 in Musical Performance

The Montana House is pleased to once again host a concert featuring Willson & McKee, a nationally touring award winning duo specializing in traditional Irish and Scottish and original acoustic music. They will be performing at 7 pm Thursday and Friday evening, August 21st & 22nd at the Montana House in Apgar Village.

Willson & McKee are…two voices with dulcimers, guitars, Irish bouzouki, harp, accordion, bagpipes, stories, dances and… FUN! The concert will include material from their nine recordings, including their latest collection from their last tour to Scotland.

Rocky Mountain Celtic…what Celtic becomes when it settles comfortably three generations in the west! It is Americans doing what they do best – interpreting their roots music in fresh and original ways! The combination of their Celtic heritage plus their Montana and Colorado roots gives audiences a distinctive musical experience. Original compositions with an ancient sound and traditional pieces are re-dressed in their customized style. Performing and studying with master musicians, storytellers and dancers in Ireland and Scotland, guarantees sparkle and depth with a Willson & McKee event! Repeated honors at such events as the Walton’s of Dublin International Songwriting Competition at the Milwaukee Irish Festival and instrumental awards such as a National Instrumental Championship guarantee the highest quality performances. The combination of blazing instrumentals, warm harmony vocals, a lot of laughter and a ceilidh dance or two translates into… never a dull moment! A Willson & McKee concert is a curiously un-tamed moment in time, gathering past and present…a comfortable and engaging musical evening with friends.

A Colorado native, classical training was Kim’s foundation, but traditional folk music became her passion. In the late 70’s and early 80’s traditional music was not that readily available, so she did her research by attending festivals, gathering unusual folk instruments, studying books, interviewing people from Ireland and Scotland, collecting stories and songs, & sending for music from abroad. She was virtually obsessed! She moves effortlessly between her instruments and her palate includes accordion, folk harp, guitar, dulcimers, and bodhran, and she never passes up an opportunity to teach a Ceilidh dance!

Ken Willson grew up in rural Minnesota and North Dakota, with memories of local variety shows, church music, family-made music and other grassroots experiences. Self-taught and determined, he passed through several musical lives, performing with many rock, country, bluegrass and other types of bands. Winning performance awards in such faraway places as Australia, he has honed his skills on stage through decades of performance and dedication to his “roots” of acoustic folk music. Ken is the pulsing folk drive, with an engaging tenor voice, tasteful guitar and bouzouki foundations enhancing the distinctive material. A weaver of wit and tales, he can also spin a fine Ceilidh swing on the dance floor!

Collecting experiences, stories and humor from 20 years of touring together, this pair has focused on educational programming, concert venues, college campuses, master classes, workshops, cultural events and festivals, and they have fine-tuned their stage performances to be anything but predictable, traditional, or expected.

The event is open to the public with a $5 charge per person, but seating is limited, so reservations are needed. Please call 406-888-5393 or e-mail: 1960mthouse@qwestoffice.net for more information and to reserve your tickets.

Hans and Toni Jungster established the Montana House Regional Craft Shop in 1960 in Apgar Village, just inside Glacier National Park. Their daughter, Monica and staff continue to carry on their mission: to celebrate and promote the creativity of Montana and Native American artists and craftsmen for our mutual benefit. The Montana House has been a long time avid supporter of Glacier Park and celebrated its 50th anniversary in June of 2010.

Montana House has been supporting Montana artisans and enhancing the Glacier National Park experience for visitors with informative speaker events and true hospitality for over 55 years in Apgar Village - the heart of Glacier.
View all posts by Montana House →
Stories from the Top – Glacier’s Fire Lookouts
Carnivores, Climate Change – a Process of Survival or Extinction