Hans Jungster left Germany in 1936, and served in the U.S. ski troops, 10th Mountain Division, in World War II. Hans met Toni at the University of Washington, in Seattle, and together they came to Montana in 1947 on a botany field trip. Hans became a Park Service Ranger in the early 1950’s and the Jungsters moved to Glacier Park, drawn by its similarity to Switzerland. The Montana House was built in a “Swiss Chalet” style in 1959.

Their daughter, Monica continues to carry on their mission: “To celebrate and promote the creativity of Montana and Native American Artists and craftsmen for our mutual benefit.”

The Montana House has hosted over 500 Montana artists since 1960. 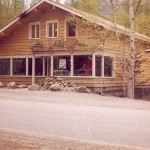 The Montana House Regional Gift Shop opened in Apgar Village on Mother’s Day 1960. This is what it looked like brand new. 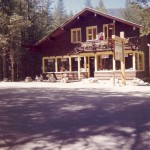 The trim is now a goldenrod color, the sign has changed again and the carport has been added. The parking spaces have been replaced by a deck and public seating. After the Apgar fire in 2003, the wood shingles were replaced with a new metal roof. 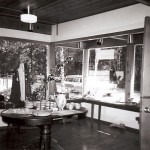 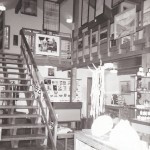