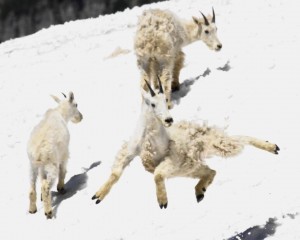 On Saturday, May 27th at 11:00 am Montana House will host a presentation by renowned local photographer/videographer Sumio Harada in another “Look, Listen and Learn” program series. Sumio will present extensive video footage of mountain goats of Glacier National Park in the recently completed room (named “Kintla Camp”) on the 2nd floor of Montana House. His videos depict mountain goat behaviors such as nanny and kid interactions, seasonal feeding and mineral licking, mating, travelling and playing on snow banks. Also included is footage of bighorn sheep, pika, ptarmigan, marmot and other wildlife species.

A reception will follow Sumio’s presentation. The event is free and open to the public but reservations are required. Phone 406 888-5393 or e-mail: 1960mthouse@qwestoffice.net

Due to popular demand, we have added a second presentation at 1pm! Call now!

Continue Reading
By Montana House on June 1, 2016 in 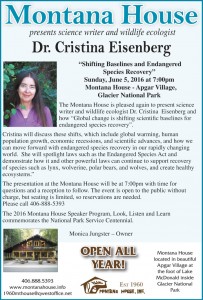 Cristina will discuss these shifts, which include global warming, human population growth, economic recessions, and scientific advances, and how we can move forward with endangered species recovery in our rapidly changing world. She will spotlight laws such as the Endangered Species Act and demonstrate how it and other powerful laws can continue to support recovery of species such as lynx, wolverine, polar bears, and wolves, and create healthy ecosystems.”

The presentation at the Montana House will be at 7:00pm with time for questions and a reception to follow. The event is open to the public without charge, but seating is limited, so reservations are needed. Please call 406-888-5393 The 2016 Montana House Speaker Program, Look, Listen and Learn commemorates the National Park Service Centennial.

Reserve A Seat
Continue Reading
By Montana House on May 5, 2015 in

Continue Reading
By Montana House on October 11, 2014 in

What would it be like to live in a a world with no predators roaming our landscapes? Would their elimination bring about a pastoral, peaceful human civilization? Eisenberg argues compellingly for the necessity of top predators in large, undisturbed landscapes and how a continent-long corridor – a “carnivore way” – provides the room they need to roam and the connected landscapes that allow them to disperse.

Author Christopher White tracks two ecologists, Dan Fagre and Clint Muhlfeld and their U.S. Geological Survey team into the high peaks as they take the pulse of Glacier Park

“Glacier Park: A Sentinel for High-Elevation Change and Why It Matters,” a presentation with Dr. Dan Fagre and Adam Clark, M.S. of the U.S. Geological Survey, with an update on the glaciers in Glacier National Park.

Continue Reading
By Montana House on October 27, 2012 in

presentation by Rebecca Lawrence, Supervisor for the Native Plant Restoration Program in Glacier National park. Lawrence explained why the whitebark pine are dying and what is being done to try to save them.

an historic account and photo presentation by Rachel Potter, former Botanist and founding member of the Montana Native Plant Society.

Continue Reading
By Montana House on October 29, 2011 in

with Dan Fagre, Research Ecologist and Director of the Climate Change in Mountain Ecosystems Project for the US Geological Survey

Continue Reading
By Montana House on April 23, 2011 in

a lecture by former Glacier Park botanist, Rachel Potter. She will discuss Marcus Jones and Morton Elrod, founders of Flathead Lake Biological Station, and their early journeys through the Park. Rachel came to Glacier in 1976, has a degree in botany, and is one of the founding members of the Montana Native Plant Society.

Continue Reading
By Montana House on October 30, 2010 in

who is Research Ecologist and the Climate Change Research Coordinator for the Northern Rocky Mountain Science Center, U.S. Geological Survey, and is stationed at Glacier National Park. Dan will discuss the results of his summer field work studies of Glacier Park’s glaciers, avalanches, and alpine vegetation.

Continue Reading
By Montana House on April 11, 2009 in

Dan Fagre,  Research Ecologist and the Climate Change Research Coordinator for the Northern Rocky Mountain Science Center, U.S. Geological Survey. He is stationed at Glacier National Park and is a faculty affiliate at the University of Montana, Montana State University and several other universities. He has authored two books, one on national parks and protected areas and the other on mountain ecosystems. His presentation will be a slide show that compares and contrasts climate change impacts and glacial recessions in the mountainous ecosystems of the Himalayans in Nepal to the Northern Rocky Mountains in Glacier National Park

Continue Reading
By Montana House on April 4, 2009 in

Chris Peterson – “Confessions of a Citizen Scientist.” Editor of Glacier Park Magazine, Chris presents his photo show and takes a light-hearted look at his own experiences as an amateur biologist in Glacier. Chris has been photographing Glacier’s flora and fauna for the past 11 years. In addition to Glacier Park Magazine and the Hungry Horse News, his photos have appeared in the New York Times, National Geographic’s Crown of the Continent Map and an international ad campaign to promote Montana. He also authored the book, Boy Wonder & the Big Burns.

Continue Reading
By Montana House on March 7, 2009 in

Continue Reading
By Montana House on November 1, 2008 in

Continue Reading
By Montana House on August 8, 2008 in

a presentation and slideshow by Michelle Tafoya, Clean Air and Climate Coordinator for the National Parks Conservation Association, Glacier Field Office. Michelle’s B.S. in biology and her studies for a master’s degree in environmental policy, plus interpretive park ranger duties in Glacier National Park for 6 seasons, gave her good back-ground for becoming a crew member of the Northern Divide Grizzly Bear Project in 2004. It also served her well to join The Climate Project, a rigorous training program led by former Vice President Al Gore, to spread the message about climate change.

Continue Reading
By Montana House on September 1, 2007 in