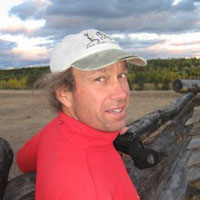 The Montana House hosted featured speaker Dave Hadden, who works for Headwaters Montana, a conservation organization that works to protect water, wildlife and wild lands in the Crown of the Continent. He has a Masters of Science in Wildlife Biology from the University of Montana and is President of the Flathead Coalition. The coalition formed in 1975 in an effort to protect the North Fork Flathead River from a proposed open-pit, mountain top removal coal mine at Cabin Creek – just six miles north of the US / Canada border. Since the time it was decided the Cabin Creek coal mine should not be built, the Coalition has focused on other coal mine and coal bed methane projects located in the Canadian Flathead. His presentation covered these proposed projects which threatened the water, fish and wildlife of the trans-boundary Flathead River, Waterton / Glacier International Peace Park and downstream Flathead Lake.